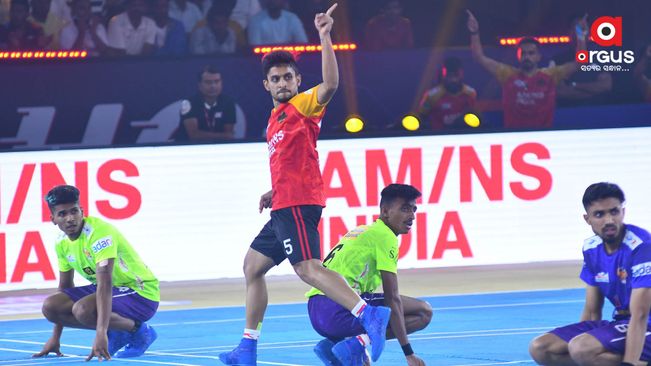 Telugu Yoddhas will take on Odisha Juggernauts in the blockbuster final in the inaugural edition of Ultimate Kho Kho at the Shree Shiv Chhatrapati Sports Complex in Pune, Maharashtra on Sunday.

Pune, Sep 4: Telugu Yoddhas will take on Odisha Juggernauts in the blockbuster final in the inaugural edition of Ultimate Kho Kho at the Shree Shiv Chhatrapati Sports Complex in Pune, Maharashtra on Sunday.

Yesterday, Telugu Yoddhas, led by Pratik Waikar, secured their place in the final after recording a commanding 67-44 victory against Gujarat Giants.

Odisha Juggernauts advanced to the final after defeating Telugu Yoddhas in qualifier 1. Arun Gunki impressed in the attack by scoring 16 points for the winning team along with Prajwal KH, who added 14 points, dismissing five players.

For Gujarat Giants, skipper Nilesh Patil was the top performer with eight points.

The season's leading attacking side, Telugu Yoddhas dominated the match with their all-round show.

Trailing at 21-39, Gujarat Giants tried recovering in the third turn with Abhinandhan Patil showcasing exceptional defence technique. His stay of 4.26 minutes not only earned eight bonus points for his side but also restricted Telugu Yoddhas to just 22 points.

However, despite Patil's heroics, Telugu Yoddhas looked in a commanding position, leading by 61-29 at the start of the final turn.

Telugu Yoddhas, the first team to claim 100 defending points in the Season 1 of India's first-ever franchise-based Kho-Kho league, held their nerves in the last seven minutes of the game and gave away only 15 points.

With INR 2 crore as the prize pool, the champion team will be awarded with INR 1 crore along with the coveted trophy while the second-placed team will take home INR 50 lakh.