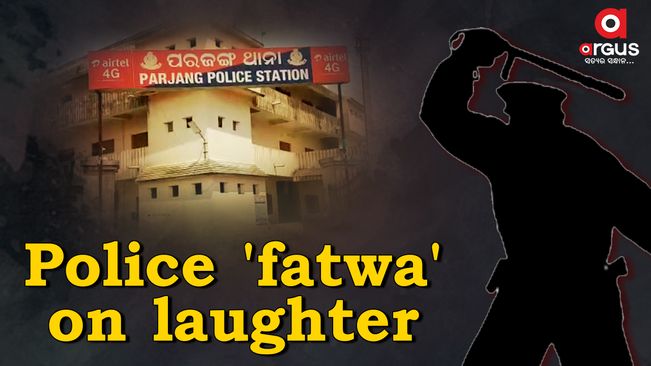 * A video of the Parjang IIC making round on social media she issues the ‘fatwa’, if you laugh, you’ll be beaten up.

* Even after more than seven decades of our independence, general public is panicked of the personnel of the State police.

‘If you laugh, you’ll be beaten up’. Such a threat may be quite common in a repressive regime. But surprisingly it was a threat from the Inspector in Charge (IIC) of Parjang police station in Dhenkanal district of Odisha. The concerned police officer, Namita Nayak seems to have forgotten that she serves a democratic nation called India. In our democracy police should be the protector and friend in need of the commoners rather than a factor of fear and threats.

This Parjang incident adds to the recent happenings that have shattered the efforts of Odisha police to build up a people’s friendly image. State police is already in the dock in relation to the Mamita Meher murder case. Opposition parties, especially the BJP allege that investigation into Kalahandi lady teacher Mamita Meher killing is not going proper way and police have weakened the case. Custodial death of one Gobinda Kumbhar in Bargarh district has put doubts on the humane image of Odisha police.

A video of the Parjang IIC has started making rounds on the social media at this juncture. In this video clip, the police officer is seen to be threatening some youths at Parjang main market. She is asking them, why did you laugh? Next she issues her ‘fatwa’, if you laugh, you’ll be beaten up. It is alleged that a youth was beaten up by the IIC at the spot. As per localites, there were no restrictions like night curfew or imposition of Section 144 at Parjang when this incident took place. This only displayed the ‘dabang giri’ or highhandedness of the police officer.

People all over the State have common allegations regarding the behaviour and attitude of police personnel. Despite all claims, police personnel in Odisha have failed to build up good relations and confidence among the general public, for whose protection they are employed and paid. It is always alleged that the unruly harsh behaviour of police officials towards the commoners is due to their proximity to leaders of the ruling party. Instead of solving minor issues or any degree of issues through non-violent means, retribution has become means of justice for the police officials. It is very important that such activities are curbed.

This brings back the old question, who will police our police? It is an irony that even after more than seven decades of our independence, general public is panicked of the personnel of the State police. And police officials are trying to terrify the commoners.

In Odisha there has been a rise in allegations of use of the police force as a tool for political mobilization by the political party in power. Police has allegedly become tools of political appeasement. Two types of corruption within the police force are also in discussion in Odisha. One is the monetary benefit that police officers allegedly receive from commoners to deliver preferential treatment in matters of law enforcement. Second one is related to political corruption that seeps down to the police force in the form of receiving personal gains, career advancements and other favours. In recent past crorepati police constables managing illegal bars have also come to fore in capital city of Bhubaneswar.

In its landmark judgment in the ‘Prakash Singh & Ors. Vs. Union of India (2006), the Supreme Court had issued several directives for police reforms. 15 years since that judgment was delivered, directives of the judgement remain a a distant dream in Odisha.