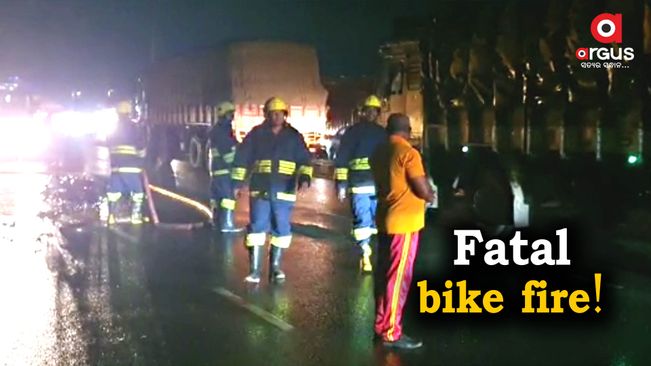 In an appalling incident, a biker was burnt alive while reportedly riding a bike on the NH-16 flyover at Acharya Vihar here last night.

Bhubaneswar, Jun 27: In an appalling incident, a biker was burnt alive while reportedly riding a bike on the NH-16 flyover at Acharya Vihar here last night.

The deceased has been identified as Chandan Pati, a resident of Purohitpur in Jagatsinghpur district.

The shocking incident occurred at around 12.30 am on Monday. Some  passersby saw it and called for the fire service personnel and police.

By the time fire service personnel reached the spot, the youth had received 80 per cent burn injuries. He was rushed to the Capital Hospital where he was declared dead.

The youth and the bike were found lying scattered at the incident site.

According to information, Pati was doing a marketing job and staying at Kesura on the city outskirts. He was returning to room after attending a wedding feast at Chandrasekharpur when the mishap occurred.

Though the exact reason behind the mishap is yet to be known, police have started investigations from different angles.

“We have identified the deceased as Candan Pati of Jagatsinghpur’s Purohitpur. He was working with a private company. Family members have been contacted and they will reach the police station soon,” said an investigating official.