India aim for series whitewash in 3rd T20I against Australia 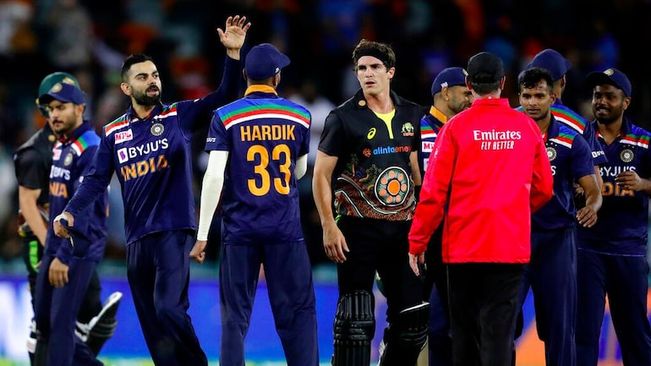 Sydney, Dec 7: India will look to ride support from the crowd as they eye a whitewash in the T20I series against Australia when they take the field at the Sydney Cricket Ground on Tuesday for the third and final game of the series.

This is an opportunity for Team India to complete a second T20I series whitewash over Australia in Australia after the 3-0 result MS Dhoni's boys got back in early 2016 when they toured the country only for two limited-overs series.

India sealed the ongoing series on Sunday when they won the second game by six wickets, thanks to Hardik Pandya's 22-ball unbeaten 42 and Shikhar Dhawan's 52 off 36. India had won the first T20I on Friday by 11 runs at the Manuka Oval in Canberra.

"Before the (Sunday) game we said we will look to ride the atmosphere and the support we are going to get from the fans. That energy pushes you through in the tough moments. (Sometimes) You don't feel pushing too much and then you hear the crowds and people backing you, and you push yourself," said skipper Virat Kohli after Sunday's game that ensured India have not lost a T20I series Down Under.

"The next game is going to be more exciting. We won the series but we still want to be professional and we are going to come out and be fearless," he added.

India had lost just a one-off T20I game back in 2008 and since then they have either drawn a T20I series or won it.

Both the teams have been preserving their top fast bowlers in the limited-overs series ahead of the four-Test series that begins on December 17, with the second T20I witnessing second string pace bowlers from both sides.

India benched both Jasprit Bumrah and Mohammed Shami for Sunday's game while the Aussies missed the services of Mitchell Starc and Josh Hazlewood. Pat Cummins had already been pulled out of the squad.

But India's batting looks far superior as unlike Australia all their top limited-overs batsmen are available. The Aussies, who were already missing David Warner who is down with a groin injury, missed skipper Aaron Finch in the second T20I. Finch suffered a hip injury in the first T20I and Matthew Wade had to step in to lead Australia and open the innings in his place at the SCG on Sunday.