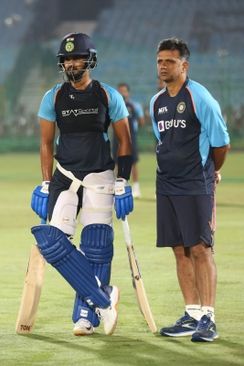 India's template in the shortest format of the game will be in focus as the hosts begin their road for 2022 Men's T20 World Cup with the first of the three T20Is against New Zealand at the Sawai Man Singh Stadium here on Wednesday.

Jaipur, Nov 16: India's template in the shortest format of the game will be in focus as the hosts begin their road for 2022 Men's T20 World Cup with the first of the three T20Is against New Zealand at the Sawai Man Singh Stadium here on Wednesday.

With just eleven months left to go for the next edition of the ICC T20 World Cup in Australia, new captain Rohit Sharma and head coach Rahul Dravid have a resurrection job at their hands.

The disappointment in the recently-concluded Men's T20 World Cup for India means that there will be auditions and look-ins for youngsters when players like Virat Kohli, Mohammed Shami and Jasprit Bumrah are rested.

For Venkatesh Iyer, Ruturaj Gaikwad, Avesh Khan and Harshal Patel, the shining stars of second half of IPL 2021 in the UAE, the series presents a chance to push their case for themselves to be in the reckoning for the long run in T20Is. There is also Yuzvendra Chahal, the wily leg-spinner whose exclusion from the World Cup squad raised many eyebrows, to re-establish himself as the main spinner of the team.

At the same time, Sharma and Dravid have to ensure that the refreshed and original template of India in T20Is is in tune with the ever-evolving times in the T20 world, something which the newly-appointed skipper had mentioned about in the pre-match press conference.

"I think the template is a very important one. We just need to set the template right, and we have got some time to do that. Of course, there are some holes that we need to fill up and make sure that they are looked after. That will be the biggest challenge as the team to do that. I'm not saying we should follow certain team's template. We just have to follow and create our own template, which is best and right for our team," said Sharma.

He also acknowledged the issue of consistency in role clarity, something which India had fallen short on when the World Cup was happening. The Indian team has to be sorted about who opens and who is at three and in the middle as well as lower order, apart from which batters can chip in some overs with the ball. "It's important because when you compare it to Syed Mushtaq Ali Trophy or the IPL, where our Indian boys play, they play differently in their franchise, Syed Mushtaq Ali Trophy and the Indian team. We strictly want to assign the role that we want them to do here because at the end of the day, what they do here matters."

New Zealand, on the other hand, have got just three days to move on from their heartbreak in the summit clash against Australia. With Kane Williamson opting out of T20Is to focus on Test series, Tim Southee has got a challenge to inspire his team from bouncing back from the finale loss in Dubai. From top to bottom, New Zealand boast of players who can take up responsibility and single-handedly take the side home.

They will also be priding upon their ability to understand the pitches and conditions quickly and adjust their game as per the same. They also have to fight against a cramped schedule to be fresh and hit the ground running against India. They would look to give game time to Kyle Jamieson, Mark Chapman and Todd Astle, who didn't play a single match during the T20 World Cup apart from a returning Lockie Ferguson. Expect the Blackcaps to give a tough fight to India with dew coming into equation, again.
(IANS) 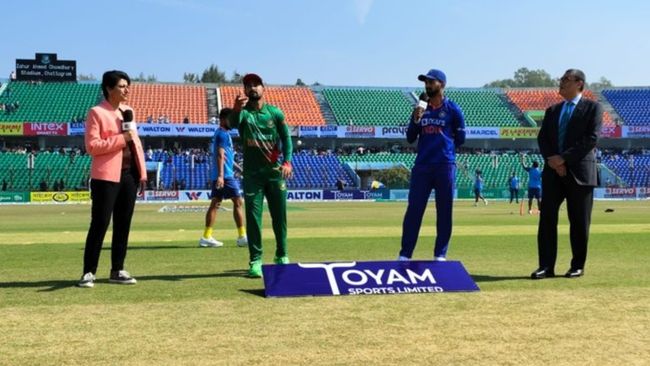