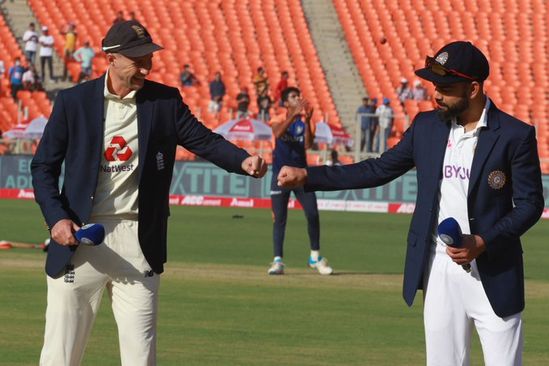 Ahmedabad, March 4: England skipper Joe Root won the toss and chose to bat first in the fourth and final Test against India at the Narendra Modi Stadium in Ahmedabad on Thursday.

“We're batting first. We need to make use of the first innings, because it'll spin again very soon so we need to get runs on the board soon,” Root said after winning the toss.

“Over the last couple of years we have progressed as a side, and it'd be a great chance to finish a great winter if we win this Test match,” he added.

For visitors, Dan Lawrence and Dom Bess came into the playing XI while Jofra Archer and Stuart Broad have been rested.

India skipper  Virat Kohli said that they would have batted first too here.

“ We would've batted first too. It looks good to bat on, on Day 1. It's been unbelievable captaining India for so long, and in Tests we have come up the ranks quite well. We look forward to coming together as a side. We have a great bunch of guys who have bought into my vision as captain. We have to be at our best, and England are a quality side, who have and can put us under pressure. We have to be at the top of our game,” Kohli said.

“Mohammad Siraj comes in place of Jasprit Bumrah for this match,” he added.

The visitors are trailing the series 2-1 and are looking to draw level the series. On the other hand, India need a win or a draw to book a clash with New Zealand in the inaugural World Test Championship final.