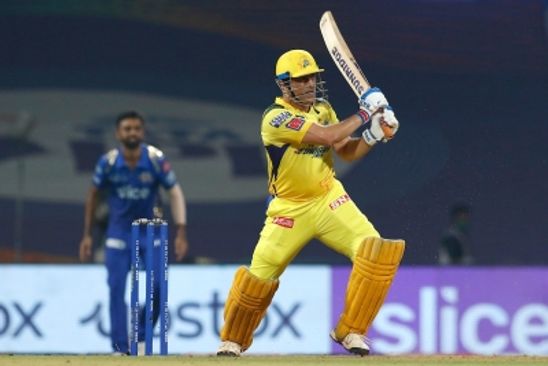 Varma top-scored for Mumbai while Suryakumar Yadav (32), Hrithik Shokeen (25), and Kieron Pollard (14) were the other contributors with the bat for them. On the other hand, Dwayne Bravo (2/36), Mitchell Santner (1/16) and Maheesh Theekshana (1/35) were the other wicket-takers for CSK besides Mukesh.

Chasing a modest target, CSK were also off to a poor start as Daniel Sams removed Ruturaj Gaikwad in the very first ball of the second innings.

Mitchell Santner, who had replaced Moeen Ali and came to bat at No 3. looked in control and hit two fours. But, the left-hander mistimed a bouncer from Sams and got out for 11 runs, leaving CSK at 16-2 after 2.3 overs.

From there on, two veteran batters -- Robin Uthappa (30) and Ambati Rayudu (40) stitched a partnership of 50 runs for the third wicket and kept CSK in the game. However, once they got out, Chennai were back in trouble as the next two batters -- Shivam Dube (13) and Ravindra Jadeja (3) didn't do much.

CSK needed 17 runs in the last over and Pretorius was trapped leg-before off the first ball. DJ Bravo came to bat next and took a single in the second ball of the over and Dhoni hit Unadkat for 6, 4, 2, 4 in the next four deliveries to seal victory for CSK.

Daniel Sams (4/30) was the most successful bowler for Mumbai while Jaydev Unadkat (2/48) and Riley Meredith (1/25) also chipped in with wickets.