Swiss Open: Srikanth through to quarter-finals 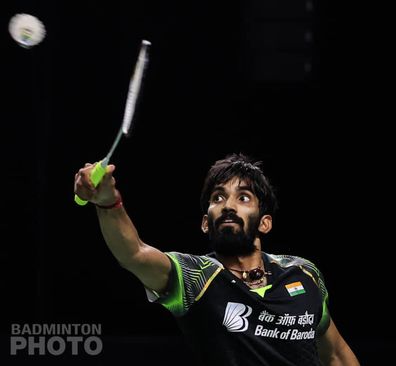 He will now face either Thai sixth seed Kantaphon Wangcharoen or the Netherlands' Mark Caljouw, who had earlier beaten H.S. Prannoy.

Satwiksairaj Rankireddy and Ashwini Ponnappa also eased into the quarter-finals in the mixed doubles category on Day 3 after beating Indonesia's Rinov Rivaldy and Pitha Haningtyas Mentari 21-18, 21-16. Rankireddy and Ponnappa had earlier stunned Indonesian second seeds Hafiz Faizal and Gloria Emanuelle Widjaja in their first round tie on the first day of the tournament on Wednesday.

Sourabh Verma's campaign in Basel came to an end as he lost 17-21, 14-21 to Thai eighth seed Kunlavut Vitidsarn.

Praneeth, meanwhile beat Israel's Misha Zilberman 21-11, 21-14 to ease into the second round while Lakshya Sen, who had pulled out of the Thailand tournaments in January due to injury, lost 16-21, 12-21 to Switzerland's Victor Svendsen.
(IANS)