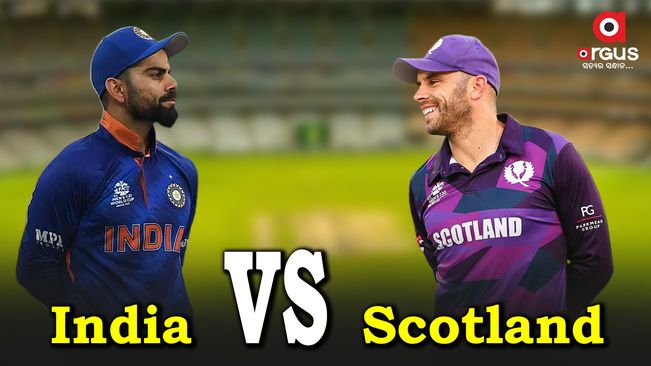 India will take on Scotland at the Dubai International Cricket Stadium at 7.30 pm (IST).

Dubai, Nov 5: India will take on Scotland in their fourth match of Super 12 stage in the ongoing ICC Men's T20 World Cup here on Friday evening.

The match will be played at the Dubai International Cricket Stadium here at 7.30 pm (IST).

India can't afford to lose any of its remaining two matches in the T20 World Cup and have to be at their best against both Scotland and Namibia.

India's chances not only depend on their result in these two matches but also the clash between Afghanistan and New Zealand.

Virat Kohli led Indian team is currently fourth in the group with two points from three games. The Men in Blue are tied with Namibia at two points with a Net Run Rate (NRR) of 0.073, behind Pakistan (8 points) at the top and Afghanistan and New Zealand with four points each.

Scotland, on the other hand, have already been knocked out of the tournament. They have lost all their three games and are currently at the bottom of their group.