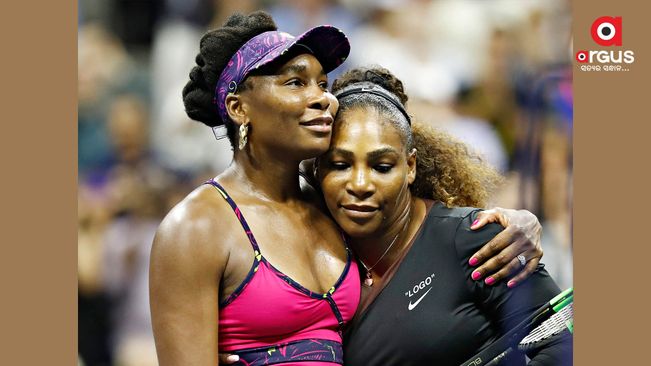 The pair of Venus and Serena Williams lost to Lucie Hradecka and Linda Noskova of the Czech Republic 7-6 (5), 6-4 to bow out in the first round of the US Open women's doubles competition on Friday.

New York, Sep 2: The pair of Venus and Serena Williams, in perhaps their final appearance together on the tennis court, lost to Lucie Hradecka and Linda Noskova of the Czech Republic 7-6 (5), 6-4 to bow out in the first round of the US Open women's doubles competition on Friday (IST).

Lucie Hradecka, 37, and Linda Noskova, 17, despite the age gap, gelled well at the sold-out Arthur Ashe Stadium to demolish the 14-time doubles Grand Slam champions after the first set went on for a marathon 63 minutes.

The legendary pair quickly packed their kits, waved briefly to the crowd and walked together to the locker room.

The soon-to-be retiring Serena will play Ajla Tomljanovic on Australia in women's singles for a spot in the Round of 16.

Venus said post-match that it was Serena's idea to play doubles.

"She's the boss," Venus was quoted as saying by wtatennis.com, adding, "So (I) do whatever she tells me to do. I don't think we have played since 2016, but might be getting that wrong."

The legendary duo had played together at the French Open in 2018, where they lost in the Round of 16. They had won their first title in Oklahoma City and, still teenagers, their first Grand Slam at the 1999 French Open.

Since then, Serena has played with Danish player Caroline Wozniacki (Auckland, 2020) and, most recently, with Tunisia's Ons Jabeur earlier this year on the grass in Eastbourne.

Venus played doubles with American teenager Coco Gauff a year ago in Paris and mixed doubles with Jamie Murray this year at Wimbledon, where they lost their second match.

On her retirement, Serena said, "I think I've mostly been kind of blocking everything out, but then at the same time I've been embracing a little bit of it, because I also want to enjoy the moment," she said after beating Anett Kontaveit on Wednesday.

"I think these moments are clearly fleeting. For me, it's really about having a little embrace but also understanding that I'm here to focus.

"I feel like everything is a bonus. So I'm just really trying to figure out which percentage I want of each." (IANS)