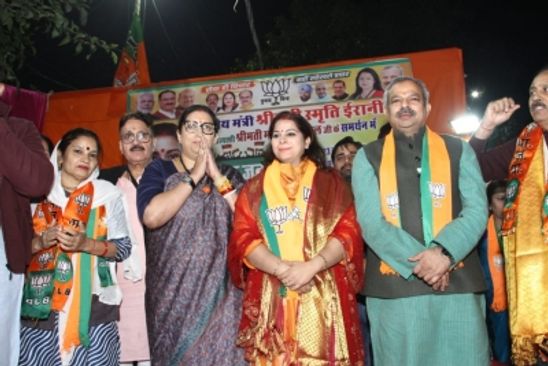 Union Minister Smriti Irani interacted with people in Delhi's Rajinder Nagar Assembly constituency which is set to go for polling on Wednesday. She addressed the people at a public rally in the constituency and appealed them to vote in large numbers for the BJP candidates.

She appealed people to vote for BJP candidates -- Umang Bajaj, Mohanlal Dayma and Monika Nischal in all three wards of Rajinder Nagar.

The Union Minister said that all the people must participate enthusiastically in the voting to be held for the MCD polls on December 4 and ensure that all the BJP candidates of Rajendra Nagar win with a huge margin of votes.

When Irani went out to campaign for the BJP candidates of Rajendra Nagar Assembly constituency, Delhi BJP President Adesh Gupta was also present there along with large number of party workers of the constituency.(IANS)