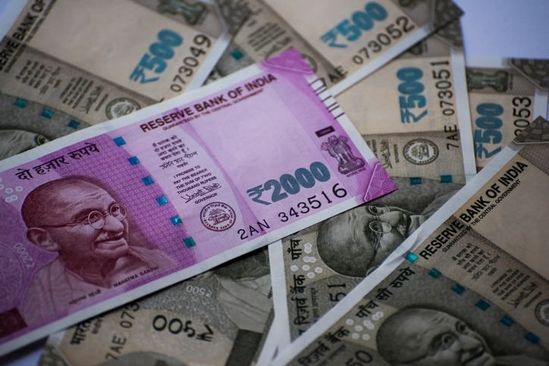 New Delhi, Sep 10:  The dollar index is at a two-decade high, reflecting the ongoing interest rate hikes by US Fed and the continuing geo-political risks.

Suman Chowdhury, Chief Analytical Officer, Acuite Ratings & Research, said: "Along with the expanded trade and current account deficit, such an environment has kept the pressure on the rupee which continues to hover around 80. While the FII outflows have been arrested, the uncertainty on capital flows and the volatility in rupee are likely to persist in the short term."

Sujan Hajra, Chief Economist and Executive Director, Anand Rathi Shares and Stock Brokers, said from Rs 73 per dollar in April 2021, recently rupee moved below Rs 80 per dollar. Depreciation of rupee by 6 per cent against dollar in the last 12 months is one of the lowest among the major countries (both developed and emerging market) leading to appreciation of rupee against most other currencies.

Within the EM Asia equities, Indonesia, South Korea, and India have historically shown the highest negative sensitivity to USD strength. Sectorally for India, real estate and financials have typically been the most negatively impacted, while Healthcare has witnessed the softest hit, Emkay Global Financial Services said in a note.

With the INR being a near-outlier in the Asia FX fall, the FX intervention strategy for the RBI will need to be revisited. The emerging bilateral imbalances (sharply depreciating) against the CNY should not become too accentuated, it said.

"We believe RBI will eventually let the exchange rate adjust to new realities, albeit in an orderly manner, letting it act as an automatic macro stabilizer to the policy reaction function. We see the INR hitting a low of 82 against the USD, before reverting to the sub-79 range," the report said.

Powell's speech was a big pushback to the part of the market which was pricing for a rate cut by the Fed on the first sign of economic weakness. Market expectations of terminal US Fed Fund rate moved up to 4 per cent vs 3.5 per cent a fortnight back.

Similar hawkishness can be seen in the commentary from other central banks in that part of the world including the European Central Bank, Bank of Canada, and Bank of England. All are hiking their respective policy rates at a pace of 50-75 basis points every meeting.

Pathak said this is not a conducive environment for foreign investors to invest in emerging economies. "Thus, we do not expect large inflows from foreign investors immediately even if India gets inducted into the global bond indices though it would be sentiment positive for the domestic investors and might extend the bond rally for some more time."

Hajra said the broad-based strengthening of the dollar against most currencies suggests that depreciation of rupee is more due to dollar strength than rupee weakness. Reasons for dollar strength include geopolitical uncertainties and rapid policy tightening by the central banks in response to high inflation have made investors risk averse. The perception that the dollar is a safer currency during global uncertainty has increased demand for dollars.

In response to higher inflation in the country, the US central bank is increasing the monetary policy rate faster than most other countries. Faster rise of interest rate in the US versus the rest of the world increased demand for dollars.

The reasons for rupee weakness include every $1 increase in crude oil price per barrel leads to a $2.5 billion rise in India's yearly oil import bill. With a major rise in global crude oil prices, India's oil imports jumped putting pressures on the rupee to depreciate, Hajra said.

In view of the global uncertainties, foreign portfolio equity investors withdrew $200 billion from major countries during January-March 2022. While countries such as the US, France, and Japan registered large withdrawals, $14 billion was also withdrawn from India. During 2022 so far, $29 billion has been withdrawn from Indian equities by foreign portfolio investors. The large outflow also contributed to rupee weakness.

However, there is expectation of the end of dollar strength. Rapid strengthening of the dollar is hurting the US economy by making exports non-competitive and imports cheaper. Large trade deficit led to US GDP growth turning negative during January- March 2022. Even a limited fall in global uncertainty would weaken demand for dollars.

In addition, oil prices have already corrected by 15 per cent from the peak. The US Energy Information Administration expects crude oil prices to correct by another 10-15 per cent to $90 per barrel by the end of 2022. If global oil price moves from the recent peak of $130 to $90 per barrel, it would mean potential yearly savings of $100 billion on India's oil imports. This would substantially reduce the pressure on the rupee to depreciate, Hajra said.

Whenever India faced significant portfolio equity outflow, it has been followed by large inflows. Already there are signs that foreign investors are turning positive on Indian equities. Even a moderation of foreign portfolio investment outflow would limit the slide of rupee.

The RBI intervenes in the foreign exchange market to reduce rupee volatility. With India's balance of payment turning unfavourable since the second half of 2021, the RBI is selling dollars. This resulted in limited (6 per cent) rupee depreciation in the last 12 months versus much larger (12-18 per cent) depreciation of euro, yen and pound versus dollar.

With a $580 billion foreign exchange reserves, the fourth largest in the world, and a $50 billion long position in the derivatives market, the RBI is well prepared and committed to keep the volatility of rupee limited, Hajra said.

Despite large global volatilities, the rupee remained relatively stable in the last 12 months due to proactive policies of the RBI. Likely changes in the global environment would make the rupee more stable in the next 12 months, he added.(IANS)