Urmila Matondkar all set to appear on 'Dance Deewane' 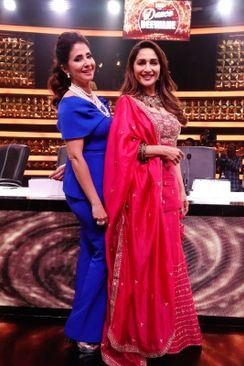 Contestants Soochna and Vaishnavi will dance to the popular song 'Chamma Chamma' with a twist of Lavni style to which Urmila will give a standing ovation and say, "It is a little bit scary to see you performing after an injury. But I couldn't take my eyes off you."

Both Madhuri Dixit and Urmila will cheer with 'seeti' (whistle) for them. Urmila's husband Mohsin Akhtar Mir will make a small cameo through a video where he will talk about their relationship.

Later, watching the recreation of her own 'Rangeela' performance by contestant Piyush Gurbhele intrigues Urmila, she will reminisce about the time she sent a fan letter to Bollywood's Mr. Perfectionist, Aamir Khan and say, "Seeing you reminds me of a young and cute Aamir Khan. After looking at his performance in 'Rangeela', I had written a letter to him. After looking at you, those memories came back and I have written a letter for you too."

At the end Urmila will be shaking a leg on Madhuri's song 'Choli Ke Peeche', and Madhuri reciprocating by performing on one of Urmila's hit tracks 'Chamma Chamma'.