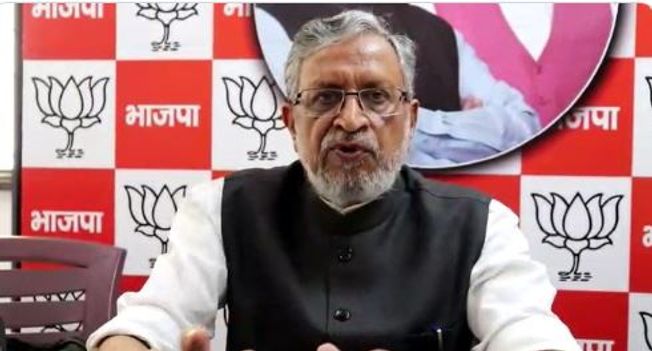 The BJP will conduct a 15-minute silent protest near the statue of Mahatama Gandhi in Patna on Sunday to protest against the "deteriorating law and order conditions in Bihar".

New Delhi, Oct 1: The Bharatiya Janata Party will conduct a 15-minute silent protest near the statue of Mahatama Gandhi in Patna on Sunday to protest against the "deteriorating law and order conditions in Bihar," former deputy chief minister of the state Sushil Kumar Modi said.

"The BJP will stage a kind of symbolic protest by holding a 15-minute silence against the increasing crime and deteriorating law and order conditions in the state," Sushil Modi told ANI here. The decision came following an attack on BJP leader and contractor Bablu Singh who was shot at by assailants in Friends Colony in Bihar's Arrah on Friday while he was on a morning walk.

Sushil Modi claimed that such incidents of firing come to the fore regularly.

"The law and order situation is regularly deteriorating in Bihar. Five people had lost their lives after a violent scuffle took place between sand mafia at a distance of 30km from the venue of the Investor's Meet which was held in Patna. The culprits were so strong in themselves that they even took the dead bodies and police have not found them till date," he said adding that they attacked the police again when they went to conduct a raid in the same area.

Comparing the crime rate in the state, the former Deputy CM said that such attacks never happened under BJP's governance.

"When the BJP was in power in the state, such incidents where criminals attack police personnel and five people are killed in an illegal sand mine. Never had it taken place that the criminals were roaming freely," he said.

He further alleged that people in Bihar are afraid that "Lalu Raj" has returned to the state.

"Wherever such criminal offences occur, the members of the party go to meet the victim," he added.

Sushil Modi further said that they have taken all details of the attack on Bablu Singh and to pressurise the government, a symbolic protest will be staged. (ANI)