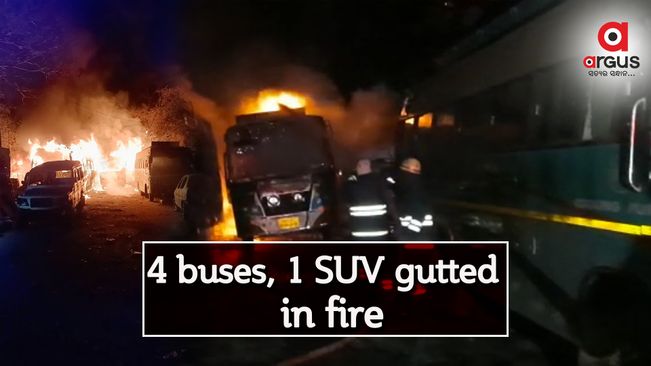 Bhadrak, Feb 10: At least four buses and one SUV gutted after major fire broke out at a garage near Dahanigadia chhak in Odisha’s Bhadrak district on Tuesday night.

Property worth crores of rupees was reportedly destroyed in the fire mishap. However, no causalities or injury were reported, so far.

As per reports, a massive fire broke out at a garage, namely Harishankar garage, located alongside NH-16 near Dahanigadia chhak in the district late last night.

The locals noticed the fire engulfed from the garage and informed the fire department immediately.

The fire brigades rushed to the spot and doused the flame. The fire was brought under control after around three hours of operation.

By the time the fire department personnel doused the flame, four buses, one Mahindra Scorpio, a cabin gutted and other materials were reduced to ashes in the incident.

The cause of the fire mishap was unknown till the report was filed.

On being informed, local police reached the spot and started a probe into the matter.