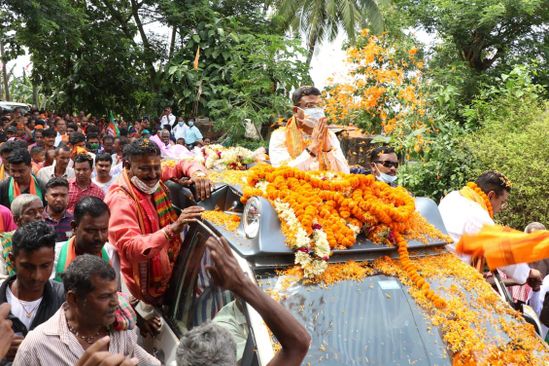 Bhubaneswar, Sep 25: People of Pipili will, this time, defeat responsible for non-distribution of Fani and other Central assistances among them and send Ashrit Pattanayak to Assembly this time, said senior BJP leader and Union Minister Dharmendra Pradhan on Saturday.

Pradhan campaigned for BJP candidate Ashrit Pattanayak at different places in the by-poll bound constituency today. He urged upon people to vote for Ashrit as he is the worthiest candidate to work for them.

“It has been two years since Cyclone Fani hit Odisha coast. Prime Minister Narendra Modi personally came and oversaw damages. He provided adequate funds for construction and repair of houses damaged in the cyclone. However, the affected people are yet to get the assistance as the State Government’s move of distribution of such Central aid through ruling party leaders and workers has been strongly opposed. People have decided to defeat those responsible,” asserted Pradhan.

Depriving people of Central assistance is a bright example of inefficiency of the Odisha Government.

The Union Minister added that people of the constituency have also built up trust on Ashrit Pattanayak that he is the only leader who would raise their issues at Assembly and in Delhi and ensure development in the constituency. Ashrit will win and work for people of Pipili, he said.