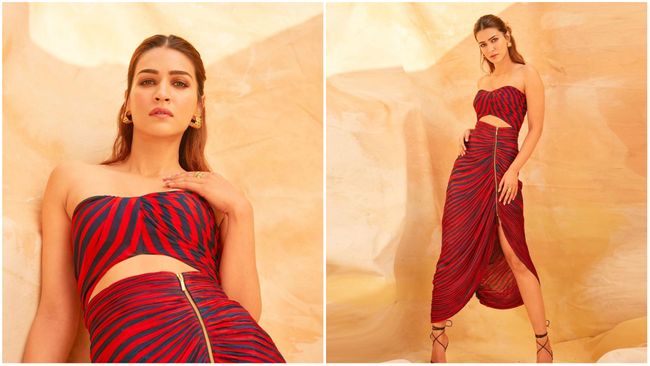 Mumbai, Jan 26: Kriti Sanon who is gearing up for her upcoming family entertainer film 'Shehzada' on Wednesday took the internet by storm with her gorgeous pictures in a red striped dress.

Taking to Instagram, Kriti treated fans with one of her film promotional looks. In the picture, she was seen posing in a high-slit cut-out red striped dress.

The actor opted for matching heels, kept her hair tied in a ponytail and wore a minimal makeup look.

To complete her look, she accessorized with statement earrings.

Sharing the picture, she wrote, "Stripe It!"

As soon as the pictures were uploaded, Kriti's fans flooded the comment section with hearts and fire emojis.

One of the fans wrote, "if perfection was a person, IT WOULD BE YOU."

On Tuesday, the second song of the film 'Chedkhaniyan' was unveiled.

Taking to Instagram, Kartik Aaryan shared the song which he captioned, "Aaryan ka dance , Arijit ki Awaaz. Get ready to shake a leg with #FootsieStep #Chedkhaniyan out now."

Sung by Arijit Singh and Nikhita Gandhi, the song is composed by Pritam and penned by IP Singh and Shloke Lal.

Helmed by Rohit Dhawan 'Shehzada' is all set to hit the theatres on February 10, 2023.

Recently, the makers of 'Shehzada' unveiled the trailer and the first song 'Munda Sohna Hoon Main' which gathered positive responses from the audience.

The 3-minute trailer showcases the 'Luka Chuppi' actor in a never-seen avatar. Action-packed scenes, quirky dialogues and power-packed performances has raised the level of excitement around this film.

'Shehzada' also marks the debut of Kartik as a producer.

The film is an official Hindi remake of the Telugu film 'Ala Vaikunthapurramloo', which starred actor Allu Arjun in the lead role.

Apart from this, Kriti will be seen in the pan-India film 'Adipurush' opposite Prabhas and Sunny Singh. She also has an action thriller 'Ganpath- Part 1' opposite Tiger Shroff.