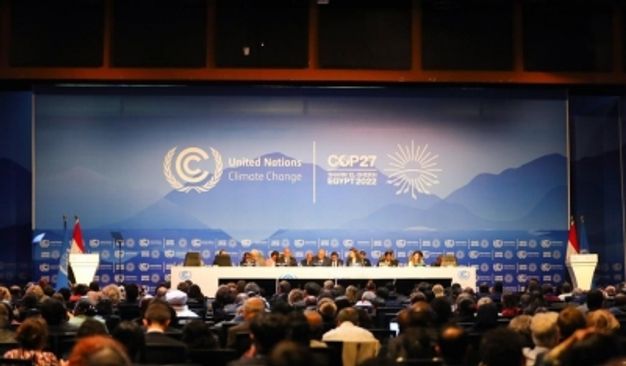 The 27th session of the Conference of Parties (COP27) to the UN Framework Convention on Climate Change has kicked off in Egypt's coastal city of Sharm El-Sheikh, introducing for the first time the loss and damage funding into the agenda.

Cairo, Nov 7: The 27th session of the Conference of Parties (COP27) to the UN Framework Convention on Climate Change has kicked off in Egypt's coastal city of Sharm El-Sheikh, introducing for the first time the loss and damage funding into the agenda.

Sameh Shoukry, the Egyptian Foreign Minister and president of COP27, said during the opening press conference on Sunday that he is pleased to see the Parties agreed to introduce loss and damage funding as an agenda item, adding that the world needs a "qualitative leap to confront climate change's challenges", reports Xinhua news agency.

The term "loss and damage" in UN climate negotiations refers to expenses already incurred as a result of climate change impacts, such as rising sea levels or extreme heat waves.

While current climate funding focuses on cutting carbon emissions to prevent climate change in the future, establishing a "loss and damage" fund means compensating countries that can't avoid or "adapt" to the changes that have already happened.

The Egyptian diplomat also noted that numerous burdens and crises are brought on by the current global geopolitical environment, adding those need to be handled so that they will not affect progress in achieving commitments related to combating climate change.

Shoukry said that the countries of the African continent are among the countries that suffer from problems and issues of climate change.

"The countries of the African continent have shown their willingness to confront climate change, but they need support," he said.

The Foreign Minister presided over a meeting earlier in the day to finalize the COP27 agenda, which included numerous items that aim to adapt to the effects of climate change, mitigate its negative repercussions, and ways to provide climate finance.

During the meeting, Shoukry stressed the need to confront the negative effects of climate change during the two-week conference, where over 40,000 participants from over 190 countries and dozens of international and regional organisations will try to work together and seek possible solutions to one of the biggest challenges the world is facing.

Meanwhile, Egyptian President Abdel-Fattah al-Sisi said that COP27 comes at a very sensitive time in which the world is exposed to "existential dangers".

"There is no doubt that these dangers and challenges require quick action by all countries to lay down a rescue roadmap that protects the world from the effects of climate change," Sisi said in an official statement on his Facebook page.

The President added that his country is looking forward that the climate conference could turn promises into implementation.

Meanwhile, Egyptian Prime Minister Mostafa Madbouly inaugurated the Green Zone, which will witness many events and activities on the sidelines of COP27.

He explained that the area allocated to the Green Zone is much larger than any previous climate summits, pointing out that this reflects an important message from Egypt.

"Egypt represents the continent of Africa in this summit, which will witness for the first time the allocation of 'Africa Day.' The event will discuss ideas of African youths and all the entities that represent the black continent," Madbouly said during the opening of the zone.

He stressed that while the African continent is one of the regions most affected by the negative consequences of climate change, African countries have only emitted 4 per cent of the world's greenhouse gases.

Therefore, he said, organising the conference in Africa is a real opportunity to send clear messages to the whole world that Africa needs great support in order to deal with climate change.

The summit will conclude on November 18.