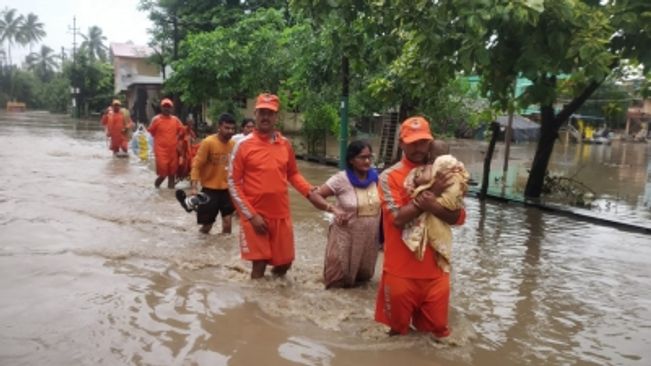 At least 1,300 people have been rescued from the rain-affected areas of Gujarat out of which 811 were rescued in a single-day from Gujarat's Navsari district, Chief Minister Bhupendra Patel said on Saturday here.

Ahmedabad, Jul 16: At least 1,300 people have been rescued from the rain-affected areas of Gujarat out of which 811 were rescued in a single-day from Gujarat's Navsari district, Chief Minister Bhupendra Patel said on Saturday here.

The rescue operation was held on Friday. "Coast Guard, NDRF, and local swimmers worked hard throughout the night to get everyone out safely in this operation. Teams of NDRF and SDRF are deployed in Navsari and more teams are on standby and coordination with the Centre is underway." It was stated in the video conference held under the chairmanship of the Chief Minister.

Heavy rain has also created misery in the Khadsripa village of Navsari district. Due to heavy rain and floods, eight feet of water filled Panjarapol for three days. About 100 cows died in the flood.