Old friend of PM Modi, Haribhai Aadhunik passes away at 88 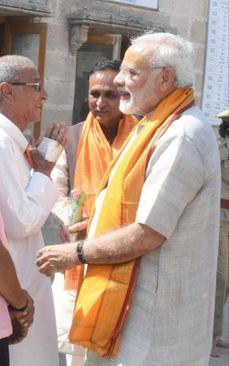 Gandhinagar, Feb 10: RSS member and an old friend of Prime Minister Narendra Modi, Haribhai Aadhunik passed away in Rajkot on Wednesday owing to age related illnesses at the age of 88.

Haribhai Nayak alias Aadhunik, who was a member of the administrative committee of the famous Dwarkadhish temple in Dwarka, breathed his last on Wednesday morning at his daughter's residence in Rajkot.

He had been a member of the Rashtriya Swayamsevak Sangh (RSS), the Vishva Hindu Parishad (VHP) besides being associated with the BJP since the time of Jan Sangh.

He was considered to be a close friend of Narendra Modi and whenever the Prime Minister visited Dwarka, he used to meet Aadhunik, sometimes even by pushing aside all the protocols. Even in many of his speeches, Modi had mentioned Aadhunik, who was known to be a simple man with a humble profile.

Aadhunik's last rites will be performed at his hometown in Dwarka on Wednesday evening.

Taking to Twitter, Nathwani said, "Saddened by the demise of octogenarian devotee of Dwarkadhish, Sh Hari Bhai Aadhunik. I fondly remember his role and contribution as member Dwarka Devsthan Samiti. I pray to Lord Dwarkadhish to place the departed soul in eternal peace and give strength to the family in this difficult times.