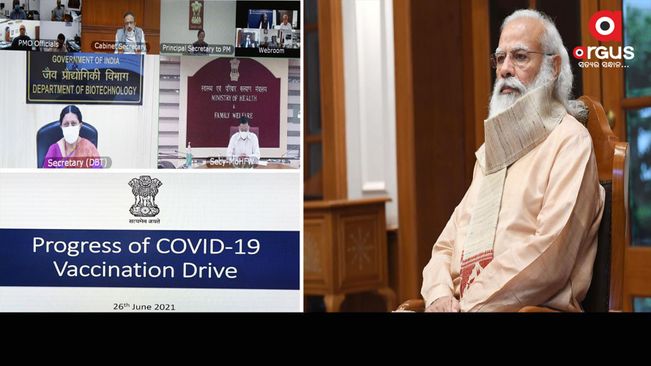 Prime Minister Narendra Modi on Saturday held a meeting with top officials to review the progress of vaccination and Covid situation in the country.

Officials gave a detailed presentation to the Prime Minister on progress of vaccination in the country.

New Delhi, Jun 26: Prime Minister Narendra Modi on Saturday held a meeting with top officials to review the progress of vaccination and Covid situation in the country.

Officials gave a detailed presentation to the Prime Minister on progress of vaccination in the country.

Officials apprised PM Modi about the vaccine supply in the upcoming months and efforts being made to increase production.

PM Modi expressed satisfaction at the rising speed of vaccinations in this week and stressed that it is important to carry this momentum forward.

Officers briefed PM Modi that they are in touch with state governments to explore and implement innovative methods to reach people for vaccination.

PM Modi spoke about the need to involve NGOs and other organisations in such efforts.

He directed officers to work with the states to ensure that the pace of testing does not go down as testing remains a very important weapon to track & contain rising infections in any region.