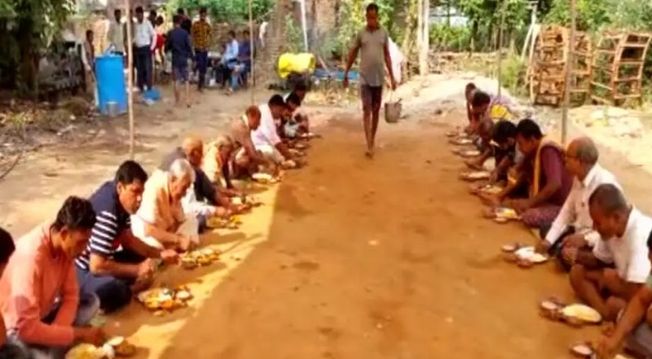 Bhubaneswar Dec. 6: A man hailing from Odisha’s Balangir district on Tuesday performed death rituals of his living wife after she eloped with her friend. According to sources, Akshaya Rout and Bikash Jain of Kurul village were good friends. Bikash used to visit Akshaya’s house very often and have fun.

In the course of time, Bikash and Akshaya’s wife Sunita reportedly developed romantic feelings for each other. And, on one occasion, they even tried to elope and get married. However, the matter was resolved then with the help of the villagers.

This time, the duo eloped once again.

Akshaya followed all the rituals, starting from offering puja for the departed soul to hosting a feast for his relatives and villagers.

“In our village, we follow certain rules. We cannot live in society without following our rules. A meeting was held in our village after Sunita eloped with Bikash and it was then the villagers advised me to conduct her death rituals,” said Akshaya.

“For me Sunita is dead now as she left me and our children. Now, I have to live with society. I had no alternative than obeying its orders.  That’s why I performed all death-related rituals for her,” he said.

Interestingly, both Sunita and Bikash were into 13 years of marriage, separately. And both are blessed with two children each.

That apart, Bikash and his wife Muskan have got tattoos etched on each other’s hand on the occasion of Karva Chauth.  While Bikash got Muskan’s name etched on his hand, Muskan had Bikash’s name carved on her hand during the festival.

Meanwhile, Bikash’s wife Muskan has filed a complaint with the local police urging it to trace the whereabouts of her husband.