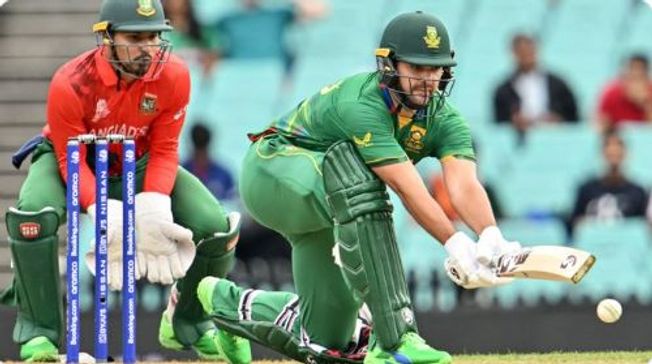 Top knocks by Rilee Rossouw and Quinton de Kock guided South Africa to post a massive total of 205/5 against Bangladesh in the Super 12s of the ongoing T20 World Cup 2022 at Sydney Cricket Ground today.

Sydney, Oct 27: Top knocks by Rilee Rossouw and Quinton de Kock guided South Africa to post a massive total of 205/5 against Bangladesh in the Super 12s of the ongoing T20 World Cup 2022 here at Sydney Cricket Ground on Thursday.

Rossouw smashed 109 off 56 balls while De Kock scored 63 off 38 balls to guide Proteas to a massive total. Opted to bat first, South Africa dealt with a big blow as Taskin Ahmed struck in the very first over of the game to dismiss Skipper Temba Bavuma who was caught behind by Litton Das for two runs.

The left-handed batter Rilee Rossouw then came out to bat. The duo of Quinton de Kock and Rossouw hammered Taskin Ahmed for 21 runs in the third over of the innings.

In the very next over of the innings, Rossouw slammed back-to-back one four and a six off Hasan Mahmud, gathering 11 runs in an over.

The rains returned to pause the play after 5.3 overs, with South Africa at 60/1. After 22 minutes of pause because of rain, the game was resumed. Both batters kept gathering single at regular intervals while smashing boundaries to keep the moumentum in their team's favour.

While smashing the Bangladesh bowlers all around the ground Rossouw brought up his half-century in 30 deliveries. After 10 overs of the play, South Africa's score read 91/1.

Bangladesh skipper Shakib Al Hasan then came to bowl but could not do much to stop the Rossouw carnage as the Proteas' batter smashed him for 21 runs with back-to-back two sixes and one four.

Bangladesh were penalised for 5 runs after their wicketkeeper Nurul Hasan moved behind when Shakib Al Hasan was in the delivery stride.

de Kock then slammed a stunning six off the delivery of Hasan Mahmud to score his half-century in just 34 balls. The duo also stitched up a stunning partnership of 150-run in the 14th over of the innings.

In the 14th over Rossouw destroyed Taskin Ahmed as he slammed three fours and two sixes to gather 23 runs in the Bangladesh bowler's over.

Afif Hossain then provided his team with a big breakthrough as he dismissed De Kock for 63 off 38. Tristan Stubbs then came out to bat and the latter slammed Hossain for a stunning four on the first delivery he faced.

Stubbs' stint at the crease was cut short as he was dismissed by Shakib after scoring just 7 runs off 7 balls. However, Stubbs' wickets did not stop Rossouw's carnage as he brought up his century in just 52 balls. With this stunning century, Rossouw became the first South African player to score a hundred at the men's T20 World Cup.

However, Rossouw's carnage came to an end as he was dismissed by Shakib after playing a stunning knock of 109 off 56. David Miller then came out to bat. In the penultimate over of the innings, Hasan Mahmud bagged the wicket of Aiden Markram for 10 to restrict Proteas to a massive total of 205/5 in 20 overs.