How close is the BJP to realize its Bhagyanagar dream? 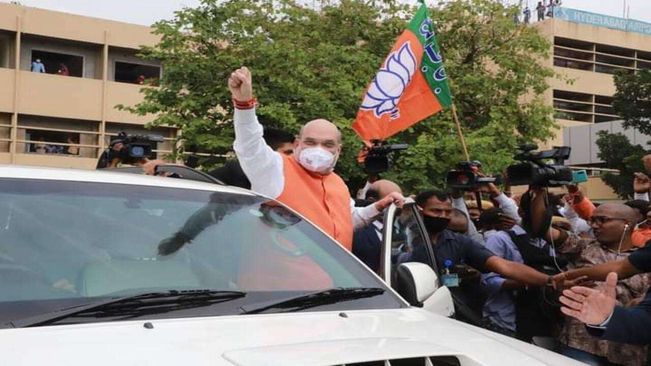 Hyderabad, Dec 7: It’s well established now… the next action will be a serious battle… a battle between the saffron brigade and the pink contingent. Yes, the Bharatiaya Janata Party and Telangana Rashtra Samiti (TRS) have now turned the arch rivals for the 2022 assembly elections.

The TRS has now 55 divisionsin the 150 municipal council, while the BJP has 48. The MIM held on to its 44. A high court judgment on Monday will give us the result for the last seat. The ruling TRS in short has only 8,456 votes more than its challenger.

In fact, the BJP has promised to change the name of Hyderabad as Bhagyanagar if the assumes power in the state.

Let’s make a vivid dissection of the GHMC poll results.  The TRS failed to defend its 99 incumbent seats it won in the last elections, losing 44 out of them to the BJP. At most of the places where the TRS won, the BJP has come close and finished the second.

What is quite more importantly is that the BJP has stolen the narrative and set the agenda for the future – development in the state and good governance. The saffron party has successfully portrayed the TRS as a dynastic, nepotistic, corrupt, decadent party and government. It also told the people that the TRS government failed to deliver its promises, all of which are explained by their policy of appeasing Muslims under pressure from the MIM.

The TRS, in turn, unconvincingly tried hard to set its stated narrative of continuity and development as an alternative paradigm. The TRS called the BJP communal, fanatic, insane, divisive and a big failure, even promising to be the nucleus of a new formation that would challenge Narendra Modi at national-level.

The TRS also tried to tell the people that it was a vote between development and communalism. The BJP strongly countered it saying it a battle between a dynasty’s corrupt politics versus nationalistic Hindutva without appeasement. People saw the picture in their own way, without the funnel vision of parties. They perhaps saw it as a battle between corrupt, nepotistic development versus communal nationalism.

One can say with record that in this round, the advantage is still with TRS-MIM but the momentum has been taken by the BJP. The impasse will be broken by battles, nay, war, that lies ahead.

The BJP has already put in place a multi-cut strategy to take the soil off the TRS feet.  It successfully demonstrated the efficacy of the strategy with three different electoral coups — in Nizamabad Lok Sabha elections in 2019 defeating K Kavitha, incumbent MP and daughter of chief minister K Chandrashekar Rao; in a by-election in Dubbaka last month, in which it humbled the TRS strategist in-charge, T Harish Rao, minister and CM’s nephew; and finally, the GHMC, in which it dented the hitherto invincible image of K T Rama Rao, CM’s son and heir apparent.

As a BJP leader said, “Daughter, nephew and son have been taught lessons they deserved. Each individually and three together add up to what people feel — a strong anti-KCR family and TRS emotion. The next defeat is reserved for KCR in the Assembly elections.”

The next by-election is in sight, in Nagarjunasagar constituency, whose sitting TRS MLA passed away on December 1. A war is going to be fought and the time will unravel the real strength of the two powers wielding now. Ample indications will be available then how strongly the BJP which got 7.1 per cent votes in 2018 assembly polls is pursuing its dream. And how forcefully the TRS is holding on to its fort. The TRS  got 46.9 per cent votes in 2018 assembly polls followed by INC 28.4 per cent, TDP 3.5 per cent and AIMIM 2.7 per cent.